Home  >  History Of The Three

History Of The Three

This residence, originally named “Schoonder Sigt” (“Beautiful View”), is deeply steeped in the history of South Africa. In the 1770s it was one of the ten most conspicuous large manors of Cape Town. It was owned and occupied by the Commandant of the Castle, General Robert J. Gordon, who discovered and mapped a good part of South Africa. He discovered and also named our great river, the Orange (after the Prince of Orange), and Plettenberg Bay (after Governor Von Plettenberg). Gordon’s Bay was named after him.

At Schoonder Sigt (which gave its name to Schoonder Street) he maintained a vast garden: a floral paradise which exported rare, hitherto unknown plant specimens, to Europe and the east via visiting ship captains. Thus Flower Street got its name.

General Gordon, who commanded the Dutch forces in South Africa, lived there until 1795 when he was defeated by the English Navy at the battle of Muizenberg. He also bred Merino sheep given to him by the Dutch Royal Family and shortly after his death his wife placed them on a passing ship bound for Australia. These sheep formed the base stock of today’s thriving sheep industry in Australia.

In 1800 the manor was purchased by George Rex, an Englishman.  Rex is believed to be the son of King George III and his first wife Hannah Lightfoot whom he secretly married before he ascended to the throne and wed Queen Charlotte. When the Dutch forces reoccupied South Africa he was generously granted land at the present-day Knysna, which town he founded.

Over the years the residence has seen many transformations from the original ‘Schoonder Sigt’ manor house to an apartment block called Sunny Lodge. At one stage it was ‘The Gardens Nursing Home’, a 7-ward psychiatric hospital specializing in rehabilitating people ‘living in the fast lane’ and ‘housewives on the busy cocktail circuit’!

In 1973, and probably one of its more unfortunate transformations, the residence was renovated to resemble a Spanish villa.  Complete with scalloped plasterwork and cactus, it was renamed “Flower Street Villa”.

The Hotel has been under new management and owners, Justin & Natalia Pearson, since January 2009 and in July 2010 the building, which is a national monument, was completely renovated and restored at a cost of over R6,000,000.  The renovation carefully restored the original fabric of the building whilst removing the “Spanish” styling, and returned it to its former glory.

Today Schoonder Sigt, or The Three Boutique Hotel as it is now known (after #3 Flower St.), is ready for her new lease of life and hopefully will remain an important part of South Africa’s history for many years to come. 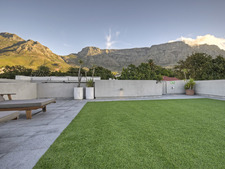